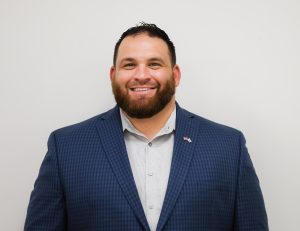 
Robert (Rob) Hamilton, Executive Director of Veterans Place, graduated from the University of Pittsburgh with a B.A. in Public Service and has recently completed a master’s degree from the University of Pittsburgh Graduate School of Public and International Affairs (GSPIA) in Public Policy and Management. Prior to attending Pitt, Rob served in the United States Army National Guard as a military police officer, where he worked in crime prevention and emergency response throughout the state of Pennsylvania. He also holds a Supervisor/Manager Certificate from Penn State University and a Non-Profit Management Certificate from the University of Pittsburgh.  Rob is an elected official of the Lower Burrell City Council in the Public Works Department. He is the Co-Chair of the leadership portion of the Allegheny County/Pittsburgh Veteran Homeless Boot Camp Committee. Rob received the 2018 prestigious Salute Our Heroes Recognition from the Pittsburgh Steelers and the Who’s Next 2019: Community Leaders & Activists Award from the Under 40 and Making a Difference: The Incline Award. In 2019 Rob received the VA Challenge Certificate of Appreciation.