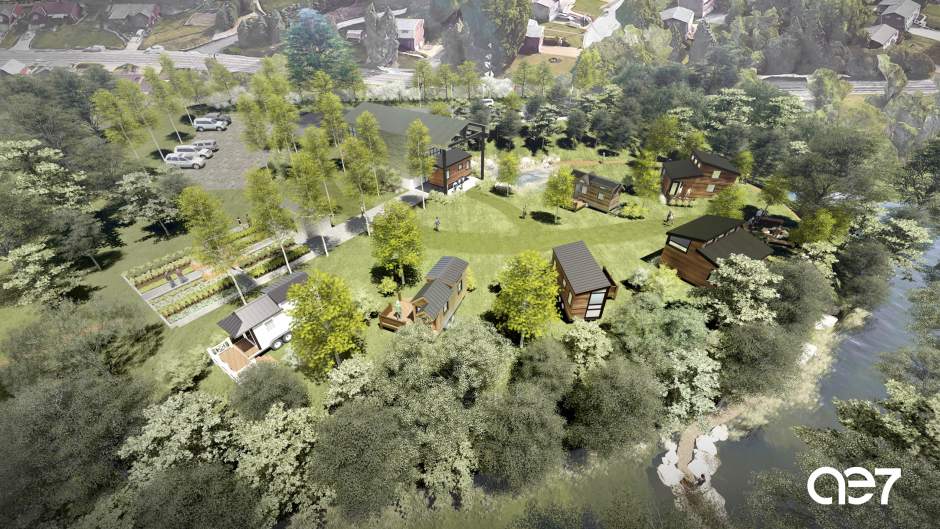 The idea struck Shawn O’Mahony after he toured a tiny house community in Austin, Texas, late last year: This would be perfect for Pittsburgh’s homeless veterans.

O’Mahony approached Marlon Ferguson, executive director of Veteran’s Place of Washington Boulevard, and with the help of students from Carnegie Mellon University’s Tepper School of Business and Strip District architects, they laid out plans for seven tiny houses on vacant land along Jefferson Road in Penn Hills.

“We see this as sort of a pilot project,” said O’Mahony, founder of BOB Project, a Penn Hills nonprofit community improvement organization, who is serving as project manager for the tiny houses. “It’s going to serve the needs of at least seven individuals, but we’re hoping it can be expanded and repeated in other communities.”

Ferguson, a Navy Veteran and former University of Pittsburgh basketball standout, said tiny houses could be an answer to one of his biggest problems at Veteran’s Place. The Larimer facility includes 13 townhouses that can accommodate up to 48 veterans, but only for two years. Ferguson said tiny houses would provide permanent shelter.

He is working on cost estimates and seeking public, corporate and foundation funding. He hopes to start building in 2017.

“This tiny house project is perfect for vets,” he said. “They can own a home at a price that’s not going to break the checkbook every month.”

About 900 veterans in Allegheny County are homeless, Ferguson said.

Defined as 1,000 square feet or less, miniature houses are popping up across the country as young and older buyers seek alternatives to hefty mortgages and energy-guzzling McMansions. Entire neighborhoods of tiny homes have emerged in Portland and Seattle, and owners created a community of tiny houses on wheels in Washington state. O’Mahony toured Community First in Texas, a 27-acre village designed to provide housing for 250 homeless people.

Pittsburgh joined the movement early this year when cityLAB, a nonprofit economic development company, built and sold a 350-square-foot home in Garfield.

Strip District architects AE7, which designs tiny homes for 84 Lumber, produced plans for the seven tiny homes, community gardens, a community building, walking trail and gazebo overlooking a creek at no cost to Veteran’s Place, said Caryn Bevins, one of the firm’s architects.

“We have to see exactly what they’re planning, but right now, I’m in favor of it,” Penn Hills Mayor Sara J. Kuhn said. “Anything the community can do to help our veterans, I know Penn Hills would have no problems with that whatsoever.”

“We think our community would embrace the project and it will bring some good attention to Penn Hills,” he said.