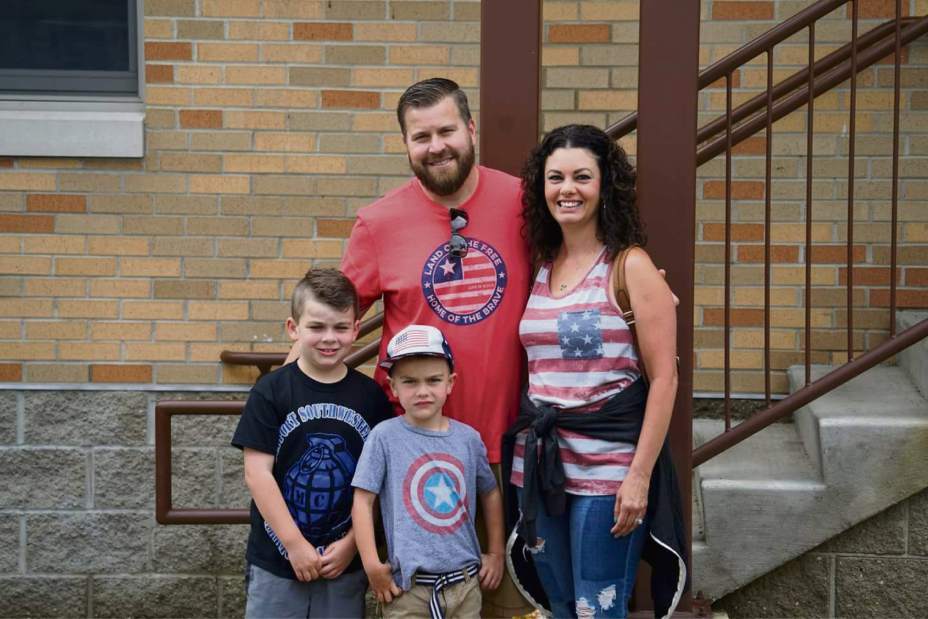 Jake Steffey, 7, gathered his friends and family to squeeze hundreds of lemons at Jefferson Hills Community Day, all for a good cause.

Jake’s motive for the “Friends Helping Friends” lemonade stand was simple: He wanted to help those in need.

After serving up more than 200 glasses of fresh, homemade lemonade, Jake raised $413, which he donated to local veterans — even going shopping with them at Walmart to buy supplies for The Veterans Place on Washington Boulevard. Walmart more than doubled the donation — taking it to more than $1,000.

“I wanted to do this so I can help other people who don’t have drinks and food,” said Jake, who is headed to second grade at Gill Hall Elementary this fall.

The idea for the lemonade stand came from a homework assignment Jake was given as a first-grader at Jefferson Elementary in the West Jefferson Hills School District.

He was tasked with writing three sentences about a boy pictured next to a lemonade stand.

Jake first noted that the boy looked bored, then added that he wouldn’t be bored if he had friends. That’s where the idea for “Friends Helping Friends” came from.

Jake loved the idea of a lemonade stand and asked his mom if he could have one.

So, Jake’s parents Melissa and Jim rented him a booth to hold his lemonade stand at Jefferson Hills Community Day, which Melissa co-chaired.

There was one condition: That he give his money to charity.

Jake went shopping for lemons, cups, ice and lots of coolers. He rallied up a team, which included his first-grade teacher Lauren Arico, his parents, brother Troy, relatives and family friends.

The lemonade stand had a great response. Jake raised $413 in lemonade sales alone.

People even donated after.

Jake, for another school assignment had interviewed his aunt’s neighbor, Peter Robert Schepis, a 30-year Army veteran. It was because of that Jake decided to give the money he raised to the veterans.

Melissa took to Facebook and saw in a group about the Warrior of Chaos Veterans Motorcycle Club that was started by Jefferson Hills resident Tony Ricci.

Ricci, 45, serves as the club president. The group was started as a way to give back to veterans, he said.

The group is comprised of all veterans, several of whom have served in combat, including Ricci who is a Marine Corps veteran.

Any proceeds received are given to one of several charities, including The Veterans Place. The organization also donates to Mission 22 and 22 Kill, which bring awareness to PTSD and veteran suicide.

Ricci said he was speechless when he learned about Jake’s donation.

“It was phenomenal what he did. That’s a true American hero,” he said.

But Ricci wanted to take it a step further.

He asked Jake and his family to come along on a shopping trip to the West Mifflin Walmart where a group of eight bikers from the club would buy food and toiletry supplies for the Stand Down for Veterans event at the Veterans Place on June 23.

Jake and crew gathered up 16 shopping carts at Walmart, where Jake admittedly was nervous. He’s never been on a shopping trip like that before, he said.

Jake bonded with the members of Warriors of Chaos.

He even asked them to stop by one of his football games this year, which they plan to do, Ricci said.

Other kids have taken notice of Jake’s actions.

The Tender Care in Jefferson Hills is holding its annual carnival for kids and this year they want to donate the proceeds to the Warriors of Chaos, Ricci said.

“For me, this shows, there’s still a lot of good people left in the world,” Ricci said.