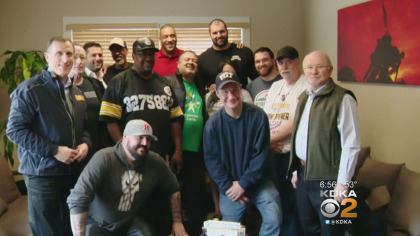 PITTSBURGH (KDKA) — The Pittsburgh Steelers have teamed up with the Veterans Place of Washington Boulevard to help a few vets who have fallen on hard times.

Steelers starting left tackle Alejandro Villanueva was a captain in the U.S. Army, earning a Bronze Star for Valor, so he can relate to these veterans and what they’ve gone through.

“Just to be able to understand and walk in another veteran’s shoes, so you can empathize and sympathize, it means everything,” said Marlon Ferguson, the executive director of Veteran’s Place of Washington Boulevard.

On Friday, Villanueva, along with the Steelers organization donated 10 refrigerators and 25 flat-screen televisions that were delivered to local veterans living in townhomes.

“They’re sending a clear message to the veterans that you are not forgotten, and you do matter and we’re all part of this big veteran family and here to help each other,” Ferguson.

The Veteran’s Place helps veterans find housing and resources to better their lives.

“What I’ve been through, because I lost everything, and being homeless and stuff, and with people that care… has been tremendous,” said Army veteran Kevin Giel.

Residents were surprised when Villanueva showed up.

“Every day seems to get better, with people like that caring about the veterans, it’s very much appreciated,” said Giel.

The Steelers were happy to help such a worthy cause.

“Having Al here to help us with that, goes a lot further than just a donation, giving time and respect is equally as important and when you have a guy of his magnitude in size and persona, I think it amplifies that,” said Nick Sero, of Heinz Field and Steelers corporate communications.