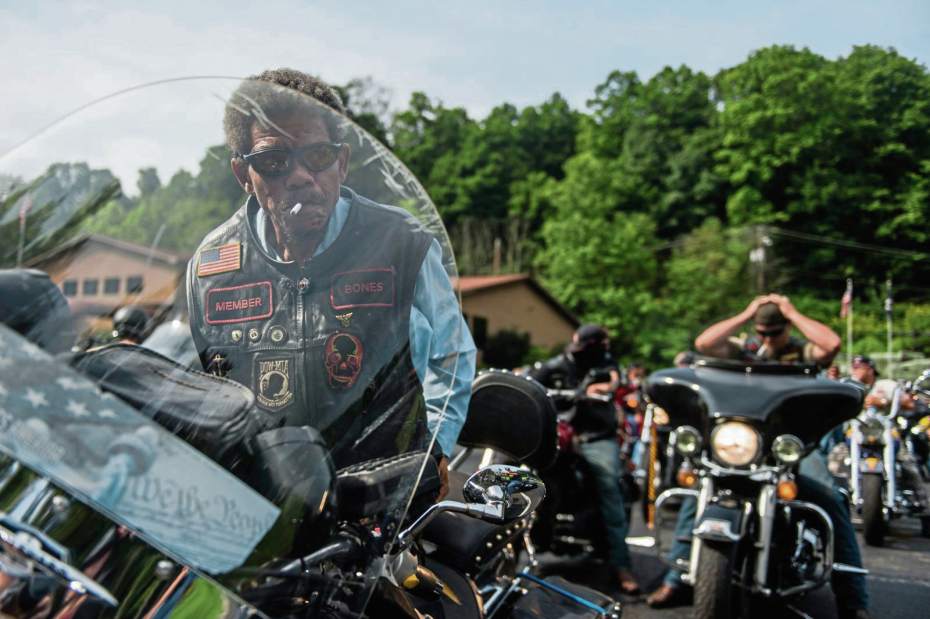 If you’d ask Lower Burrell Mayor Rich Callender who those people were who met Saturday morning at the VFW Post 92 parking lot, he’d tell you it was a group of heroes.

Around 40 motorcycle riders, along with Lower Burrell emergency responders and military vehicles from the New Kensington-based Army Reserve unit, congregated in the parking lot along Wildlife Lodge Road before they made their way down to the American Legion Post 57 in Saltsburg, then back to the Lower Burrell VFW.

There are around 300 homeless veterans in the Pittsburgh area, said Rob Hamilton, chairman of Pittsburgh Rapid Results Homeless Veterans’ Boot Camp, which is a group of service providers across Allegheny County that finds permanent housing for veterans. He’s also a Lower Burrell councilman.

Statewide, that number sat at 963 in December, which was a 15 percent decrease from the year before, according to the U.S. Department of Housing and Urban Development’s Annual Homeless Assessment Report. There were just over 40,000 homeless veterans across the country, according to the same report.

The Zodiac Motorcycle Club, of Braddock, organized the ride, which was dampened somewhat by the threat of scattered thunderstorms.

“But this is still one of the biggest rides we’ve put on,” said Dean “Wrench” Balouris, Zodiac’s road captain. “It warms our hearts, us here at the club, to see you all here today.”

One of those riders was Bill Lunz, 59, of Allison Park, who brought his 2007 Harley Davidson Road King to join his fellow Zodiac riders.

Lunz, a Zodiac member and co-organizer of the ride, founded the Flight 93 Memorial Ride after visiting the memorial near Shanksville for the first time. It’s a nonprofit that sponsors rides to benefit veterans. The first fundraiser benefitted the Wounded Warrior Project.

“But three years ago, I wanted to do something for local veterans and that’s when I met Veterans Place – they really know the locals,” he said.

Since then he has organized rides in Allison Park and Fox Chapel.

This was the first year having a ride fundraiser in Lower Burrell.

“It grows every year,” he said, looking up at the sky. “Even though it looks like rain, we still are getting a good crowd.”

“I can’t wrap my head around the fact that people serve in the military and then end up homeless,” Ferguson, a Navy veteran, said minutes before the riders fired up their engines.

He said he is grateful for the support and noted that 92 cents of every dollar raised goes toward the nonprofit’s efforts to house homeless veterans.

“We have a low overhead – we want to keep it that way,” Ferguson said.

“It’s great camaraderie,” said the 56 year-old Marine veteran from Oakmont. “It brings us all together as one and helps out a great organization that helps veterans.”

Dillon Carr is a Tribune-Review staff writer. You can contact Dillon at 412-871-2325, dcarr@tribweb.com or via Twitter @dillonswriting.